The A14 Tunnel finally in compliance with safety standards 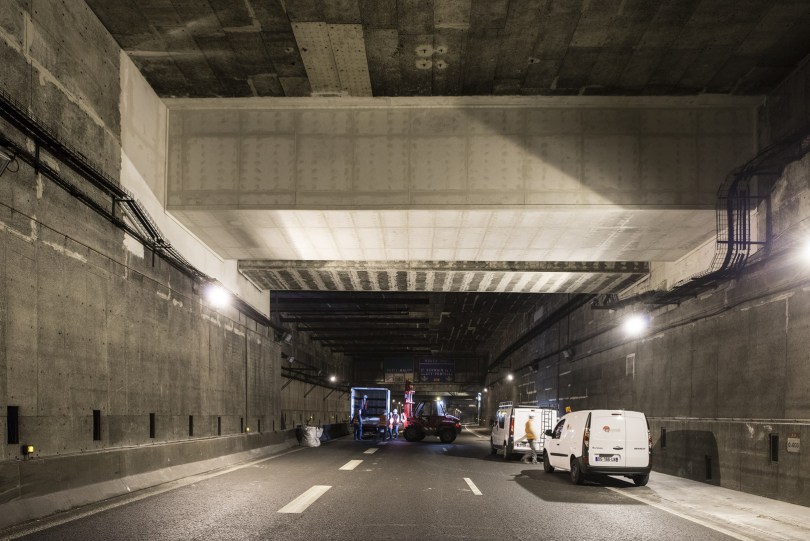 After seven years, the upgrading to the standards of the A14 tunnel has been completed for a few months. A large-scale project for which Promat™ has worked on passive fire protection. Since 2015, work has been carried out aiming at securing the ventilation and smoke extraction network of the RATP Paris underground line 1 tunnel.

Ventilation and smoke extraction network: an impressive installation
Used by 750 000 people every day, line 1 of the underground has an exceptional set of ventilation and smoke extraction systems which aims to ensure safety and comfort of passengers. Current requirements made necessary these pipes to meet safety standards. In addition, an operating agreement between RATP and DIRIF required that procedures to be properly applied in the event of a fire. Given their size and restrictions inherent to the worksite, the task was rather complex. Despite the difficulties of the project, Promat™ and Yvroud were able to provide suitable technical solutions.

Organisational restrictions
As it is often the case in this type of site, one of the main factors to take into account was to ensure that underground passengers and car drivers did not suffer from any inconvenience caused. Traffic was interrupted every evening from 11.00pm to 5.00am, allowing teams to work in optimum conditions. Another measure needed maintaining the ventilation system active. As the two fans could not be put out of service at the same time, work was carried out over two periods of five months and ducts refurbished one after the other.

A prototype of duct tested in laboratory
The project took place in several phases. “To meet the technical requirements of this project and guarantee the wholeness of the system, we had to develop a prototype on a reduced scale (dimensions (L) 7 metres x (H) 1.2 metres x (l) 2.4 metres), in order to assess its resistance to fire” says Hakim Bouzouita, Yvroud Operations Manager. Tests carried out by the Efectis laboratory, based on the standardised temperature curves HCM ? of up to 1 300 °C, being conclusive, the company tackled the design part. Two full-size ducts were then made with Promatect-T plates™.
Then, the second step of the project, which consisted in dropping off the duct, required special means, as explained by Hakim Bouzouita: “four nights were necessary to cut all the two ducts of a 20 meters long, at the rate of 5 metres per night. A forklift allowed our teams to support the weight of each of these elements and to handle them in the highest respect of safety standards. “To make the prework for the implementation of the ducts easier, the reinforced concrete ceiling was submitted to ferro-scanning in order to map precisely the metal parts aggregated in the slab.
Finally, the last step was the installation of the ducts. “Upstream of the project, our teams designed and produced the U-shaped metal frame and then pre-cut the plates. Carried to the worksite, they assemble themselves as a jigsaw puzzle to be directly fastened to the pre-drilled structure”, points out Hakim Bouzouita. In the event of a fire, the ducts were designed to guarantee a very high level of external fire resistance at level N3 (HCM 120 ° C / CN 240) and ensure, inside the ducts, a thermal protection against hot smoke at level N1 (CN 120). Perfectly meeting these high demands, 2 000 m² of plates (width 1.20 m, length 2.5 m) reinforce the structure of the smoke and ventilation system.